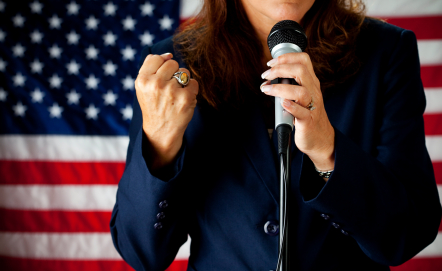 Billy Joel once sang, “There’s a new band in town but you can’t get the sound from a story in a magazine!”

It’s the same with hearing the voice of a political candidate, only with more at stake than mere entertainment.

We’re not yet on the eve of an election, but as every news outlet and social media feed reminds us, the rhetoric is already cranked up high. (Does campaigning ever really stop?) The battle for the White House in 2020 is already well underway. The process to narrow the field, the infighting and mud-slinging that make politics a blood sport began once the mid-term votes were counted, and it’s a crowded field out there. Voters need to sort out a cast of unknowns, little-knowns and comeback kids (who are not kids at all!). It doesn’t matter where you fall on the political spectrum, or whether you want change or the status quo. When a candidate is running for office, and you’re eligible to vote in that election, you want to know what they’re all about, even if only to stock up on reasons why someone is not worthy of the office. As we are aware, it’s not just about who’s right for the job, but why everyone else is so wrong.

A pamphlet can give you all the facts about a candidate’s education, background and experience, but you can’t tell whether they sound sincere or believable. Do they seem friendly, abrupt, knowledgeable, nervous? You can’t know that from looking at a photo. The timbre and tone of a person’s voice reveals so many subtle, almost imperceptible things.

When you’re the candidate, you need to summon the stamina of a marathoner, smile like you slept with a clothes hanger in your mouth, and shake a thousand hands a day. And then come the questions. So many questions! The same ones get asked over and over again. It’s just how it goes. And no matter how many steps you take or helpers you have on board, you’ll probably end up disappointed that you’ll never get to talk to every voter. It’s just not possible.

One of the problems with door knocking and hosting town halls is availability. Not just the candidate’s but the voter’s too. It might not be convenient for someone to show up in person at a debate or speech to hear what you have to say. So, what if you could answer a voter’s questions whenever he or she wanted to ask them? You’d never again interrupt someone’s supper with a doorbell ring!

By launching their own Amazon Alexa skill and/or Google Assistant action, candidates can talk to more people than they ever could before, on demand. It’s an interaction, an engagement, a conversation, led by the owner of a smart speaker. The politician answers in their own voice and gives their personal touch without having to be there in person. And the voter controls the narrative from the comfort of their own home, on their own time.

When the candidate does schedule an event, the smart speaker owner can receive an alert and be there face-to-face, if that’s what they want.

Ahead of the mid-terms, Amazon announced a partnership with Ballotpedia, a not-for-profit, non-partisan election information website. Amazon said its AI was asked millions of questions during the 2016 Presidential election and the company learned from that experience. Powered by the Ballotpedia info, in 2018 Alexa was able to answer questions about ballots, the names of candidates and, later, results, in real time.

Naturally, everyone wants to know whether Alexa, Siri and other AI will take sides in this increasingly divisive world of politics which we now find ourselves. Journalist Rachel Withers with Slate.com attempted to lure the AI responses into partisan territory, without success.

Alexa’s response to the Slate writer when asked who she should vote for: “That’s for you to decide”. From Google Assistant: “How you vote is up to you”.  And Siri: “That’s a very personal decision”.

Amazon and Google both pull a lot of their info from Wikipedia and as long as that info stays informational, and as unbiased as possible, so will the answers. Smart speakers also source current news articles, say, if someone wants to know about a specific issue or bubbling scandal. Alexa will bring up the latest info, and it’s up to the question-asker to decide whether the source is reliable, however they define that term.

Ballotpedia’s mandate is purely about information, not partisanship. Staff are listed by name, and readers are invited to let them know if there are any concerns about bias. That’s more than can be said for most of our major news outlets, where we’ve come to accept that some – not all – operate on a mission to make one political side seem always right and the other always wrong. The truth is somewhere in the middle, and that’s what voice-first info is aiming for. It will bring the information for you to filter in your own way, without telling you what you should do. It’s what traditional media used to do, back when it was believed that each side had good ideas some of the time.