Kids Say the Darndest Things (into your smart speaker)! 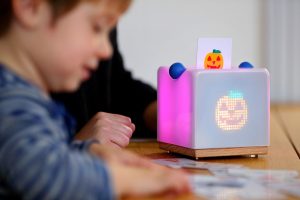 Soon, kids will be home for the summer.  Sure, there’s camp and friends and family trips, but there’s a good chance they’ll also be hanging around home more.  Maybe your house is the one where their friends like to chill.  And your kids plus their friends and your smart-speaker could add up to a challenge or two.

Even if your little darlings are perfect, obedient angels, they’re eventually going to push a boundary or two when faced with peer pressure.  It’s not difficult to imagine this scenario.

Your daughter’s friend:  Did you know you can order a human skull on Amazon?

Your daughter: No way!

Your daughter: That’s so cool! Alexa, order a human skull!

Two days later a white skull – with brain and vertebrae– arrives in a box, along with a charge of $2,000, plus shipping and handling because, as everybody knows, human skulls aren’t eligible for Amazon Prime. While you’re relieved that it’s only a model, you’re still unimpressed.

In fact, something similar has happened when kids were left to their parents’ own devices.

A 6-year old in Dallas, Texas, ordered seven pounds of cookies and a $170 dollhouse through her family’s Echo Dot. Her mother found out when she received a confirmation email. The child learned a valuable lesson when the Kidkraft Sparkle Mansion dollhouse was donated to a children’s hospital, but her family enjoyed munching on the cookies.

Then when the story of the child’s purchases was told on San Diego’s TV news, Alexa was awakened by hearing her name and started ordering more dollhouses for more children. However, it appears that those purchases didn’t go through.

Sales of smart speakers and surveys show that millions of young kids are using them, and those who do, engage with them for longer periods of time than teens and adults. Younger children are more often using smart speakers than phones, unlike their older siblings, who have their own devices in hand.

How can you protect your Amazon account from the whims of little people in your life? And protect the little people from things they can access, too.

You can turn off voice purchasing or change the settings, so a PIN is required for purchases via the Amazon Echo.  Don’t write the four-digit code someplace easy to access, such as beside the Wi-Fi password, or say it out loud around nosy little ears.

Disabling voice purchasing via Google Home is also done through its app under settings.

You could turn of course turn off the mic altogether, but that would defeat the purpose of having smart speakers, wouldn’t it. If they can’t hear you, they’re useless, and if you must get up to turn them on every time you want to use them, well, that’s not exactly a hands-free experience, is it.  Consider having a designated Alexa or Google Assistant time, such as when they’re doing homework.  Kids can ask all the questions they want under the watchful ears of Mom and Dad.

Your credit card isn’t the only thing at risk for your kids.  They could also turn Alexa into their own personal DJ, playing music with profanity-laced lyrics you’d rather they not hear.  Make sure your smart speaker is linked only to services that have parental controls, such as Amazon Prime or Google Play, and use them.

Amazon’s Drop-in feature that allows calls from device to device is handy as an intercom for calling family members to the table, but it also allows calls from outside your home (although, they do need to be in your contact list for them to be to able to do that). Fortunately, there are a couple of steps you must go through within the app, to manually approve an incoming caller. Less worry about someone dropping in on your kids when you don’t want them to.

Concerns about privacy follow smart speakers like ducklings follow their mother.  Some tech experts recently raised concerns about Alexa’s employees’ ability to pinpoint where you live.  As one Twitter user pointed out, there was a time when everyone’s address was listed in the phone book. Revealing where you live has no inherent danger, as such, except perhaps that it exposes you to marketers and door-to-door salespeople.

A group of child protection and privacy organizations is calling on the Federal Trade Commission to investigate whether Amazon’s Echo Dot Kids speaker violates COPPA – the Children’s Online Privacy Protection Act.  They claim kids’ privacy rights are being violated by the collection of their data when they use the kid-centric version of Amazon’s Echo device.  The complaint also claims there’s no proof that parents and caregivers are the ones giving consent to the child’s use of Echo Dot Kids.  Amazon has responded by saying its FreeTime software that comes with the speaker gives parents control, and does comply with COPPA.

We’ll be watching where this goes and whether there’s any merit to the coalition’s concerns.